U16 Football and Hurling Championship Regulations 2022

1. These rules cover both U16 Championship and Shield competitions

2. To be eligible to play in the U16 Championship, a Player shall have a birth date on or after January 1st 2006.

3. Each Championship will be played on a Round Robin basis, with group size based on entries, with a maximum of 12 teams in any given competition and shall be drawn, where possible, into three groups of 4 by open draw. A maximum of one team per club shall be allowed in any grade.

4. The drawing order will define the home and away fixture schedule as follows (following defines schedule for a 4 team group) 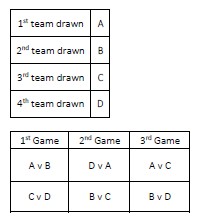 7. When teams finish on equal league points for qualification for the concluding stages, the tie/’s shall be decided by the following means and in the order specified;

(i) Where two teams only are involved –

a) Outcome of the previous meeting of the two teams involved
b) Scoring Difference (subtracting the total Scores Against from total Scores For);
c) Highest Total Score For
d) A Play-off

(ii) Where more than two teams are involved –

In the event that a team involved in a tie consisting of two or more teams had their finishing points total affected by a loss of points against that team on a proven objection, forfeiture of points for breach of rule / regulation, or by loss of points for failing to fulfil a fixture, that team shall not be included in any play-off and shall deemed to have finished in last place in whatever means is used to decide the tie. The procedures outlined in 7 (i) and 7(ii) shall then be used to separate the remaining teams in the tie depending on number of teams still tied.

8. All games are play or concede with the following exception - the Chairperson or An Rúnaí of CCC2 may officially call off or postpone a fixture if he feels that the circumstances are exceptional.

9. If home pitch is unplayable and the away team has a playable pitch then the venue must be reversed. The home team will concede the game and be removed from the competition if they refuse to travel to the playable pitch.

10. In the case of a club that has control of its own pitches contact must be made by 6 p.m. on Friday for a Saturday game and by 12 p.m. on Saturday for a Sunday game or before 6 p.m. on the day before a midweek game by the home team declaring that their pitch is playable/unplayable.

11. If the home pitch is declared playable in these circumstances only the referee may subsequently deem it unplayable as per T.O. 2022. If the home team declares their pitches unplayable then Regulation 9 applies.

12. Should the home team declare their pitch unplayable after the times outlined in Regulation 10 without the referee’s consent when the away team has a playable pitch the home team will
forfeit the match if they do not travel to their opponent’s venue.

14. In the event of bereavements, cancellations will be at the discretion of the Chairperson or An Rúnaí of CCC2 only. A game will be given off only where the bereavement has a direct bearing on a particular team.

16. All Weather/Artificial pitches are officially sanctioned by the Dublin County Board and clubs in possession of same or prepared to rent same are entitled to use them for any games including championship - Mentors are advised to check with their opposition (should they have an all weather pitch) as to the surface they intend to use, to ensure that adequate footwear is taken/ used.